L band comprises four different bands on the electromagnetic spectrum: 40-60 GHz (NATO), 1-2 GHz (IEEE), 1565-1625 nm (optical), and ~ 3.5 micrometres (infrared astronomy). In broadcast technology, L Band refers to the frequency range of 950-1450 MHz / 950-2025 MHz in MDU systems with stacked L band signals. Satellite modems and television receivers work in this range, with the signal translated to and from the satellite band by either dedicated upconverters/downconverters or a solid-state low-noise block converter and upconverter (LNB).

All receivers are designed with front ends featuring a generous input range and at least 50db of gain adaptable by Automatic Gain Control (AGC). Achieving full mute on the input typically requires isolation approaching 80db. Unpatched, a receiver with leakage across the jack will compensate by increasing sensitivity until it gets the input it wants. This can usually be seen at initial patch when the signal briefly disappears until AGC obtains the required gain. The signal then reappears, apparently unaffected by patching. While it looks like the jack failed to switch, the receiver has actually compensated for the inadequate level. Most professional receivers have an input indicator which will show the drop but the “capture” effect of the front end will completely eliminate any cross-coupling of the two signals, and there will be no impairment to the patched signal. This AGC response is often very confusing to operations staff, and is almost always interpreted as jack failure. There isn’t a dual video jack available that can meet the necessary level of isolation, so AVP does not recommend a dual video jack for L Band service. Even a BNC bulkhead using a BNC patchcord will have isolation issues when: 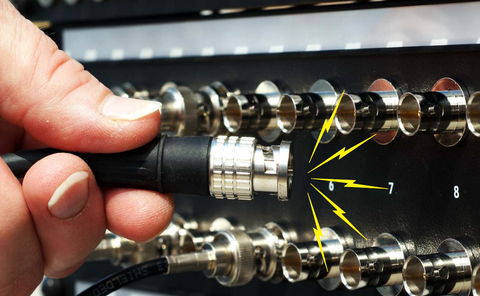